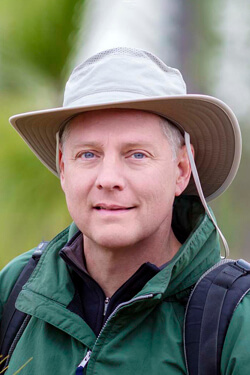 Go out and observe tropical organisms — with all of your senses, possibly aided by tools that add modalities (e.g., use a pH meter) or that otherwise expand beyond human limits (e.g., use a bat detector to drop echolocation signals into the range of human hearing).  Notice patterns.  Ask why these patterns exist.  In other words, what are the underlying processes that generated these interesting patterns?  With all the creativity, clarity, and hard-core logic you can muster, generate mechanistic hypotheses to answer “why do these patterns exist?”.  (These are your scientific hypotheses; each one is falsifiable, so testable.)  Discuss all of this extensively with others.  Design a set of additional observations — including experimental manipulations, consultation of existing publications, etc. — to sort among your hypotheses.  Ideally, each hypothesis generates a prediction or predictions that guide your study design, especially those predictions that differ among your hypotheses.  Carry out your project (when appropriate include many, independent, randomized replicates); analyze the results (which will probably include rejection or acceptance of alternative statistical hypotheses); draw conclusions (i.e., which scientific hypothesis is best supported by your evidence?); share your discoveries with others.  Hone every step through abundant, open discussion and critical reflection.  Repeat.

In a nutshell (I’m imagining one gnawed by an agouti), that’s what many of us refer to as the “OTS model” of field course education.  It is a teaching model that emerges from the foundational scientific method, tailored to the OTS experience.  It is “hands-on,” “inquiry-based,” and is a key core of the OTS teaching philosophy since the inception of muddy-boots OTS courses in the 1960s.

OTS’s field courses grew out of a set of pre-OTS Fundamentals of Tropical Biology courses for faculty members, organized by Jay Savage during the early 1960s.  OTS officially formed in 1963 and — with a grant from the National Science Foundation — Savage ran the first officially OTS-branded Fundamentals course.  A group of about a dozen graduate students was invited to participate for a subset of that first official OTS course, and Dan Janzen was among that select group in Costa Rica.  Janzen then co-led the 1965 graduate-student OTS Fundamentals course and helped develop it into the celebrated, inquiry-based field experience it has become.

During those first few OTS graduate courses, Janzen practiced what he preached.  One of his many thought-threads wove around observed spatial patterns of dispersed seeds and the dynamics of seedling recruitment, all considered in the context of biodiversity and the latitudinal diversity gradient.  He reasoned that most dispersed seeds land near mom, and that host-specific enemies are likely to attack seeds at high densities near mom, whereas seeds found at low conspecific density far from mom are more likely to survive.  Therefore, successful recruits tend to be found at intermediate distances away from mom, and that when played throughout the forest, the winners of this game should maintain levels of diversity similar to that present in their parents’ generation.  Janzen published his ideas 50 years ago as a multi-faceted, mechanistic hypothesis in his 1970 American Naturalist article entitled “Herbivores and the number of tree species in tropical forests.”  Janzen explicitly acknowledged OTS at the end of his treatise.

Also back in 1963 – the same year in which Janzen participated on his first OTS course, Joseph Connell initiated a long-term forest dynamics research project an ocean away in Queensland, Australia.  Connell’s observations of seedling recruitment and forest diversity (as well as coral dynamics) led him to similar insights to Janzen’s.  Connell published his arguments in a 1971 proceedings article entitled “On the role of natural enemies in preventing competitive exclusion in some marine animals and in rain forest trees.”  Connell and Janzen discussed their ideas with one another before either published his version; the final versions have been linked together as the “Janzen-Connell Hypothesis” at least since Steve Hubbell used that phrase in a 1979 Science article.

The Janzen-Connell Hypothesis has been a guiding concept in tropical biology for 50 years.  Hundreds of research projects and thousands of research publications expand upon, test, tweak, and — of course — criticize the idea.  On balance, more research results support the Janzen-Connell Hypothesis than those that do not.  In any case, the concept continues to shape a great deal of inquiry in tropical biology.

Just as the Janzen-Connell Hypothesis and other Big Ideas serve as useful long-term conceptual guides in tropical biology, long-term observations are immensely valuable.  We cannot go back in time, and historical reconstruction from indirect evidence is never perfect.  Consequently, historical observations are invaluable, perhaps especially when those historical data can be directly compared with observations made in the present.  In the May 2020 issue of National Geographic magazine, Elizabeth Kolbert (author of The Sixth Extinction: An Unnatural History) describes our emerging awareness of a global decline in insect abundance and diversity.  Accumulating evidence for this trend includes long-term observations from OTS’s La Selva Research Station, which figures prominently in her article.  It is sobering to realize that reduced insect abundance and diversity could cascade to reduce plant diversity as Janzen-Connell insect seed predators and herbivores decline, yet we can galvanize ourselves into turning that tide.

While we celebrate the 50th anniversary of the Janzen-Connell Hypothesis, we should also celebrate more than 50 years of similarly novel, transformative, and guiding ideas from throughout the OTS community; an ever-expanding network of OTS friends (students, researchers, visitors, etc.); and the legacy data that uniquely equip OTS researchers to answer many of the questions we pose in tropical biology.