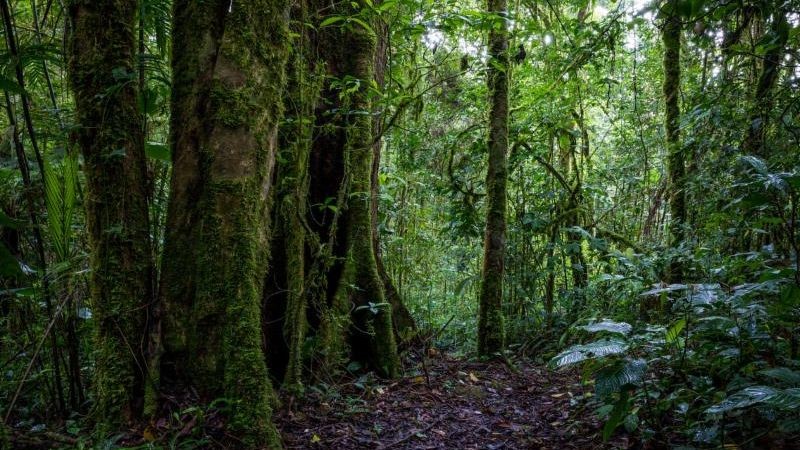 The CARBONO Project (“carbono” means carbon in Spanish) was launched in 1996 by Deborah A. Clark, David B. Clark, and Steven F. Oberbauer at the La Selva Reseach Station. From its inception, the project has focused on how tropical rainforest productivity and dynamics are affected by interannual climatic variation and long-term climatic and atmospheric changes. The project was explicitly conceived to serve as a cross-disciplinary research magnet, such that collaborators in many disciplines could build on the core long-term field data-series and the unique landscape-scale plot network. The success of this idea can be seen in the diversity of topics covered in the 100+ publications from this project to date.

Two key and novel ideas motivated the project’s design. First was a focus on landscape-scale phenomena. Our interest was the performance of old-growth tropical rainforest across the within-landscape gradients of topography and soil nutrients. Such a perspective cannot be addressed with a single forest inventory plot, the typical research design at tropical forest field sites. A second innovation was our focus on forest performance at annual and sub-annual timescales. Climate is seasonal everywhere, including in the wet tropics. The CARBONO project was designed to make it possible to assess the effects of annual and sub-annual climatic variation on forest productivity and dynamics over the long term.

Clark, Clark, Oberbauer, and other collaborators developed the first grants for the CARBONO Project. Initial support came from NSF, DOE, the Andrew W. Mellon Foundation, and Conservation International’s TEAM Initiative. Subsequent funding has been provided from other programs within NSF and NASA. Today (2012) the core measurements are being supported by a 5-yr grant from NSF’s LTREB program to David B. Clark and Deborah A. Clark with additional funding from NASA to D.B. Clark. Steven Oberbauer leads a parallel NSF-funded research program at La Selva, monitoring forest atmosphere exchanges of CO2, water and energy using eddy flux methods.

The CARBONO project is based on field measurements carried out across the project’s network of 18 half-hectare plots. The half-hectare plot size was selected based on both the spatial scale of significance within landscape variation in the forest basal area and the grain size of the different habitats of interest, particularly steep slopes. Three edaphic categories were identified as capturing the important axes of upland (non-swamp) landscape structure: (1) moderately fertile flat sites on old alluvium (the youngest oxisols at La Selva), (2) relatively infertile flat sites on ridge tops, and (3) relatively infertile steep slopes. Plot locations were selected using the La Selva geographic information system (GIS) to produce a stratified random design to sample the three edaphic categories. We used random numbers to select plot coordinates within the GIS coverages of soil types and slope. Potential plot locations that crossed streams, main trails, or protected areas were omitted. Plot selection was therefore stratified random within edaphic categories. An important feature of the plot-network design was that the researchers had no knowledge of forest structure at a selected plot location. As a result, the network provides a representative, objective assay of the entire landscape. Plots were surveyed with a tripod-mounted surveying compass and were based on slope-corrected distances (subsequently verified by GPS-location of the plot corners). In each plot, permanent monuments were installed at 10-m spacing.

From project inception in September 1997, the following core long-term field measurements have been continuously maintained in all 18 0.5-ha plots of the CARBONO Project plot network (the current funding extends through the 2013 census):

The high and sustained productivity of the project, approximately 100 publications to date, is evident in the list of publications. The project has amply fulfilled our original goal to serve as a research magnet for collaboration researchers. Over 100 researchers have co-authored papers related to data developed from the CARBONO Project.

The biggest scientific findings to date have centered on the tight coupling of forest performance to climate. Hotter nights and drier dry seasons both decrease wood production. The temperature and drought effects are statistically independent, a fact that only became detectable as the length of the data series increased. Because climate will surely warm and may well become drier in tropical rain forest areas, these are troubling results with global implications. Increasing atmospheric concentrations of CO2 have been hypothesized to be stimulating increased productivity in tropical rain forests. Our data-series, by far the longest to date from this biome, show that any stimulatory effects attributable to “CO2 fertilization” are trivial compared to the negative impacts already occurring from higher temperatures and from water-limitation.

Research findings from the first 12 years of the CARBONO Project have spanned five broad thematic areas:

D.A. Clark and D.B. Clark are forest ecologists. The research to date in other areas has proceeded in large measure by our seeking out scientists with additional expertise and offering to collaborate on interdisciplinary projects of mutual interest.

From 1980 – 2010 D.A. Clark and D.B. Clark lived on-site and managed the project through daily interactions with the three long-term Costa Rican field technicians participating in the project. In 2010 the Clarks moved to the United States. Since then the daily meetings with technicians have been conducted with Skype video calls. At the end of each field day the technicians scan the day’s field sheets and email them to the Clarks, who review them before the next day’s meeting at the start of the work day. In addition the Clarks make periodic trips to La Selva to continue technician training, update equipment inventories, and address any issues that can’t easily be worked on in video calls. The combination of daily contact supplemented by physical visits is working smoothly.

In 2014 Dr. James R. Kellner (Brown University) joined the Clarks as a Co-Principal Investigator on the current round of National Science Foundation Funding (NSF LTREB 1357177, 2014-2018). In 2016 the two half-time and one full-time forest technician positions were consolidated into two full-time positions. These two Costa Rican paraforesters (Leonel Campos and William Miranda) have been with the project since its inception, working in all phases of the research in both the field and laboratory.

With the annual census of 2017 we will complete the 21st consecutive annual census of the CARBONO plots. The CARBONO Project remains unique for the tropical-forest biome. At no other tropical-forest field site has forest performance been monitored over the long term at the landscape scale and at annual to sub-annual timesteps. The plots have served as a potent magnet to attract collaborating researchers, particularly those in remote sensing ecology. The field site’s location in the Republic of Costa Rica, which continues its traditional welcoming policy to foreign researchers, has been another key advantage of the project. 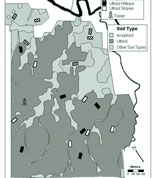 Map of the locations of the 18 0.5 ha CARBONO Project permanent forest inventory plots at the La Selva Biological Station, Costa Rica. Plots were sited using a stratified random design based on soil type and slope.

The Principal Investigators of the CARBONO Project (David B. Clark, Deborah A. Clark, James R. Kellner) are strongly committed to the principles and practice of free and open data access.

Data from the CARBONO project are posted on this website for free and unconditional use. There is no sign-in requirement to access the data, there are no conditions on data use for any non-commercial purpose including analysis and publication, and no records are kept of the identity of those downloading the data (we do track the number of data downloads).

The Principal Investigators are interested in knowing who is using the data and for what purposes. We would appreciate hearing from users of the data (to dbclark50 @ yahoo.com) on a variety of issues, including any errors or ambiguities in data or metadata, actual and potential uses for the data, and suggestions for improvements. We welcome offers to collaborate on publications arising from use of these data. In the case of publications that make substantive use of the data, we would appreciate acknowledgement of the institution supporting this research; for example, “Data from the CARBONO Project were developed with support from the United States National Science Foundation, most recently through NSF/LTREB 0841872 to D.B. Clark and D.A. Clark.” We emphasize that none of these requests should be construed as interfering with absolutely free and unconditional access to the data; these are requests, not conditions. The data can be downloaded completely freely with no reporting requirements or usage restrictions. It is our hope and a goal of this project that our open data use policy will foster the use of CARBONO data in a diverse suite of research efforts on tropical rain forest ecology.

For analyses of the CARBONO data we use data from the weather station at the La Selva Biological Station: www.ots.ac.cr/meteoro. Because the annual plots census starts on 1 September and runs till early November, for many analyses we use average values for a 365 day interval from 1 October of one year till 30 September of the following year. We call this census-based interval “CARBONO years”. The primary source for all La Selva met data should be the La Selva met station. Here we post a 15-year subset of these data summarized by “CARBONO years”.